Ah, summer in the Pacific Northwest. It’s an undoubtedly beautiful time of the year in an undoubtedly beautiful place; the sun shines, flora & fauna flourish, and, you guessed it, there are spiders everywhere. Oh, you didn’t guess it? Well, let me tell you. There are spiders. EVERYWHERE.  I emphasize this mainly because it is a fact that I forgot to take into account yesterday as I headed to a new trail near my Bothell abode. Since I have now done the Meadowdale Beach Trail three times in that many weeks, I figured it was time for a change of scenery. Thanks to my AllTrails App, I found a new spot just 20 minutes east called the Paradise Valley Conservation Area.

Consisting of a 13-mile system of trails open to hikers, bikers, and equestrians (though some are designated for hikers only, see trail markers for information), the Paradise Valley Conservation Area is a 793-acre area that protects the Bear Creek watershed.

I set off for the trail at about 1 o’clock on Wednesday afternoon and was pleasantly surprised to find a good-sized dirt n’ gravel parking lot when I arrived. There were a few cars and a couple groups of people chatting, but it was not crowded by any means. Though I can almost guarantee it’s a hoppin’ spot on the weekends, on this weekday, it was nice and sparse. After adjusting my fanny pack and almost setting off my car alarm when my water bottle rolled off the roof and bounced off my car while I was adjusting my fanny pack, I was off.

All trails start at the Mainline Trail that you will hop on from the parking lot. Just past the parking lot, I took a tiny “hikers only” loop that went around a  trail that had plaques describing plants like it was some sort of living museum. Not exactly the path to go on if you want to feel like you’re in the untouched-by-humans wilderness, but it was kind of cool to have the opportunity to learn a bit about what you’re seeing. You’ll find these plaques occasionally along the Mainline Trail (and other trails as well), but less frequently.

After the quick loop, I hopped back on the Mainline Trail for awhile. You’ll pass a lot of trail heads along the Mainline Trail, each leading to another trail that leads to another and so-on. While on the trail, I wished that I had looked at the map better before I started so I had a better idea of what I was getting into. Though the markers show how far it is until you reach another path, it doesn’t show you how long that path is, so it’s really easy to end up walking farther than you anticipated. And that’s what I did.

I eventually decided on the Lloyd trail (it seemed like a reasonable trail to take) and started off. The Mainline trail is fairly wide and well-traveled, but the side trails tend to narrow and ferns reach across like a clingy couple who got seated across the aisle from each other on a transatlantic flight. Slugs are not strangers to the footpaths, so makes sure you keep an eye out lest you want a slimy shoe. Nature is beautiful, isn’t it?

Yes, it is. Except for the spiders.

I wasn’t even 5 minutes into the Lloyd Trail when I got that first feeling of having an invisible strand of something across my face. But, being 5 minutes in, it was too late to turn back. I had to press on. Every few minutes, something would touch my face, or I’d feel a small tug on my clothes and look down to find tiny fibrous streamers as if I just crashed some spider’s party. Poor spider. If it was your party, at least you can cry if you want to. Well, it wasn’t all spiders. Once I looked down to find small caterpillar making its way across my chest. Pervy bugger. I flicked it off and everything was fine.

The Lloyd Trail ended and I hopped on the Southern Traverse Trail, which led to the Wetland Plateau trail, which told me it would lead to the parking lot eventually. And it did, after about 3,000 more destroyed spider homes. I would not have wanted to watch spider news yesterday evening, it would have been a real  downer. Though most web destruction were just a strand or two and minimal damage, one particular one was the spider equivalent of a condo that caught the biggest catch of the day: my face. That was the worst. I saw it as the sun glimmered off of it .01 seconds before I walked into it, so my feet were able to backpedal before I took the whole thing out, but it was still probably the worst moment of that hike for me and it was definitely the worst moment of that spider’s day. It’s probably been on the phone with its insurance company since yesterday. Poor spider. I hope its insurance coverage is as good as it’s trail coverage.

It’s rare that I start getting cranky while hiking (because it’s so peaceful and relaxing, you know?), but I was definitely getting pouty towards the end due to the immense amount of freaking spider webs to the face. But, you know, that’s the trade-off when you get the trail practically to yourself: you have to do all the cleaning. Soon I made it back to the Mainline Trail and and to the parking lot, got home, cleaned off all of the spider webs, and went and got some sushi. It was a lovely way to spend the day.

Miles hiked: 3.06 (according to MapMyRun)
Difficulty: Easy. It’s all pretty level, but my legs were still feeling it the next day.
Navigation: The paths are well-kept and defined, but navigating the trail system may take some practice.
Overall: Beautiful place to spend a day if you don’t want to drive very far and don’t mind watching your step for “gifts” left by the equestrians who use the trails. If you’re not a spider fan, definitely a.) wear a visor/ full body protection or b.) wait until spider season winds down. 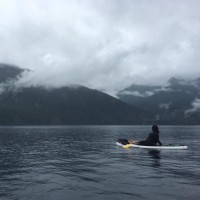